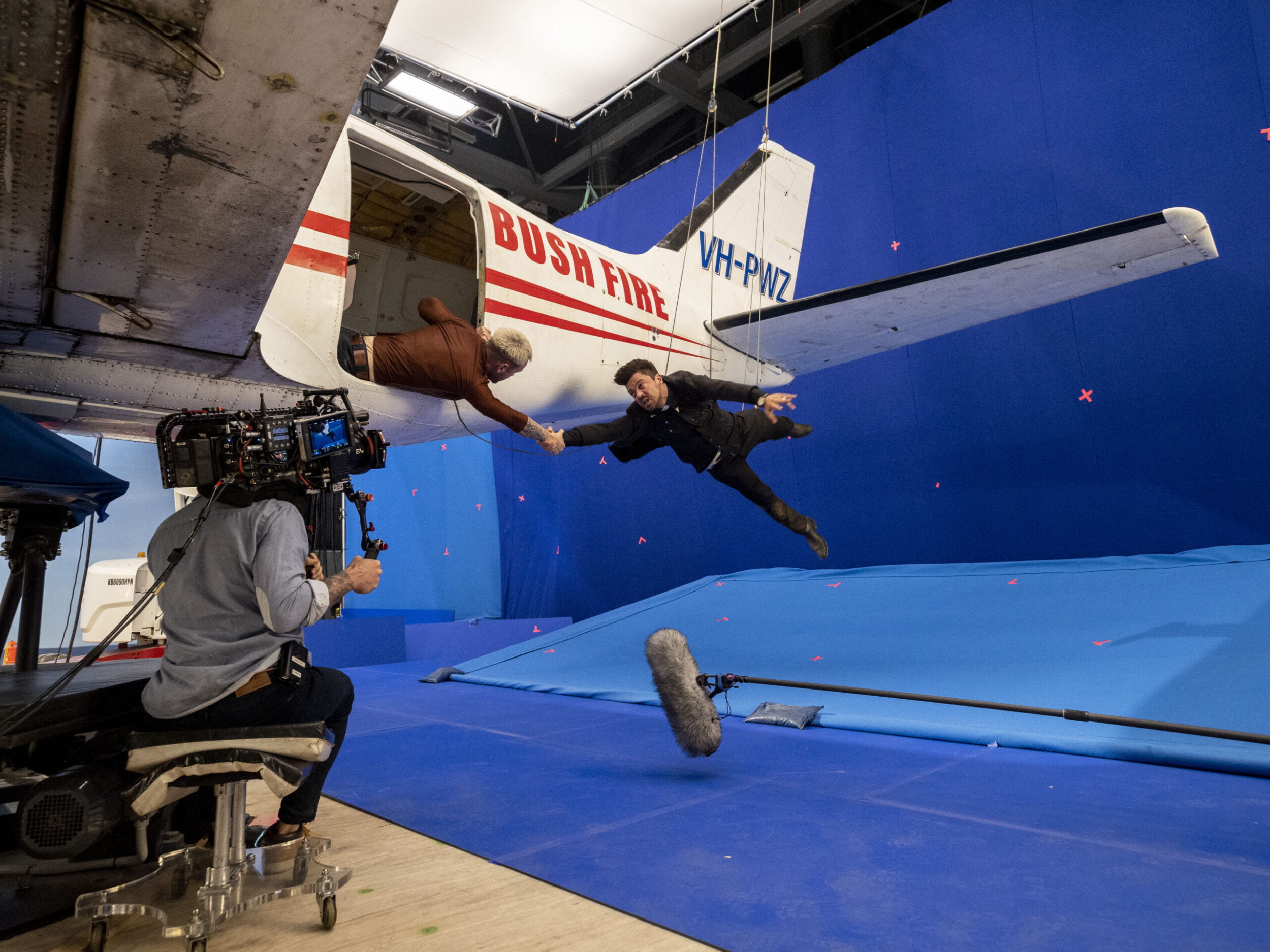 Preacher showrunner Sam Catlin admits he knew nothing about Melbourne until he landed at Docklands Studios to film the final season of the cult TV series.

Catlin soon fell in love with the city and now describes working in Melbourne as ‘one of the best times of his life’.

As the seven-month long shoot of Preacher Season 4 wrapped at Docklands Studios in late June, Catlin found time to chat with Bel Tromp about his time in Melbourne.

As an American all I know is Sydney. All I know is the picture of the (Sydney Harbour) bridge and the picture of the (Sydney) Opera House. So I sent a pre-scout – last summer I think it was – and they looked at… Sydney, Brisbane and Melbourne. When they came back and they said well we think Melbourne is going to be best, I was so disappointed! I was like, ‘what are you talking about, that’s not Australia!’ Because as an American I really don’t know much about Melbourne. But they said it’s the most versatile, it’s the best crews, it’s the best facilities.  So I got here and it was just great. The show, story wise, it takes place in a lot of different places. Some takes place in Melbourne, Australia, but what we found here is that Melbourne has just a lot of different looks to it. Also, everyone I knew that’s Australian was like, ‘Melbourne’s the place to be. Sydney’s full of wankers’. (laughs)

How have you enjoyed living in Melbourne?

I’ve loved being here… it’s a great city. In some ways, it feels a bit like an American city I’ve never been to, but then it also has this history and the Victorian architecture and the amazing food. I think the highlight was probably going to the (Australian Rules) footy game with a friend of mine.

Mark Harelik, who plays God on the show, has become a huge footy fan so he took me and walked me through it.

When and how was it decided that Preacher Series 4 would be filmed in Melbourne? Was it a pragmatic choice or was it dictated by storyline, or a combination of both?

It was a combination of both. Preacher’s a roadshow… so it’s these characters going all over the world looking for God. We had done our first season in New Mexico. The second season was New Orleans-centric. The third season, we were still in New Orleans. But we knew we had to hit the road and go… some place that’s very different and iconic. We were given generic options in the States that weren’t going to look that different than where we’d been.

The more I heard about it, there were just great crews and there were tax reasons to go; it was going to be affordable. I think we were a little concerned just logistically with how it was going to work with the time differences because I’m in L.A. for most of the time, but it just worked out great.

And what was the reaction of the cast and crew – were they a bit like you?

It was split. Half the people were terrified of being so far away from home and then the other half were just like, ‘this is going to be an amazing adventure.’

As a writer and the showrunner, how early on did you come to Melbourne to have a look at what was on offer and how you could adapt the storyline to be filmed here?

I didn’t really come here myself until maybe three weeks before we started filming, but there was pre-production going on; lots of pictures being sent, going out on scouts or recces. So I had a general sense of what we had and what was going to be available to us. But it wasn’t until we got here and said, ‘well this can be a Middle Eastern section…’ And this is what’s sort of iconic and great about Melbourne – the city itself. Pretty much everything we could think of, Melbourne provided.

Is filming here in Australia, in Victoria, similar to filming in the U-S in terms of the skill of the crews and the standard of the crew?

We were definitely worried about that because we’d had great crews in America. The crew that we’d had in New Orleans… was fantastic. So for all the financial and creative incentives for coming here, that was the big question. But the crew here was amazing; it was great. I just finished directing the show and it was the best time I’ve had on set. Super professional, very engaged. I think it’s a very hard show to understand and to get, and it sort of challenges all the departments. The best thing about Preacher is it’s unlike anything on TV, but that’s also the challenge too. It takes some adapting, but this crew figured out the show very, very quickly. Someone was asking me at the wrap party the other night, ‘how do we do it differently?’ and it was exactly the same. It was very professional, really good.

Working here at Docklands Studios, what were your impressions?

Working at Docklands Studios was amazing; a very state of the art facility. The offices were great, the stages could handle everything that we seemed to be able to write, so it was fantastic. I actually took the tram to work most days from my hotel – the free tram!

This was your first experience adapting a comic book, a book, to a screenplay. What sort of experience was that. What advice would you have for other writers thinking of doing this?

Seth Rogen and Evan Goldberg brought Preacher to me six years ago; I’d never heard of it. It was their favourite comic from when they were kids and I read it and was like this is crazy… but I don’t know how you turn it into a TV show. But I felt like we sort of figured out that there’s a spirit of the show, you know. That as long as tonally it feels like what we love about Preacher – the irreverent anything can happen – then we can sort of tailor the narrative to more of a television narrative.

What would you say to other productions thinking of filming in Melbourne?

I know that people are going to ask me when I get back to the United States, ‘what was it like working in Melbourne? Do they wear shoes? Were they drunk all the time?’ I will be like, ‘it was an unbelievable experience.’ It was a fantastic way to end the show, the crews were top notch and it was just a world-class city and I had an amazing time, one of the best times of my life, both personally and creatively. I’ll definitely be recommending it.

Based on the DC Comics series, Preacher follows preacher Jesse Custer (Dominic Cooper) on a quest to find God, along with girlfriend Tulip (Ruth Negga) and best friend Cassidy (Joseph Gilgun). Developed by writer, producer and showrunner Sam Catlin (Breaking Bad) with executive producers Evan Goldberg and Seth Rogen, the series airs on the AMC Network in the US and locally on Stan. Filming took place in and around Melbourne in early 2019 including Docklands Studios, central Melbourne, St. Kilda, Geelong, Little River, You Yangs, Parwan.