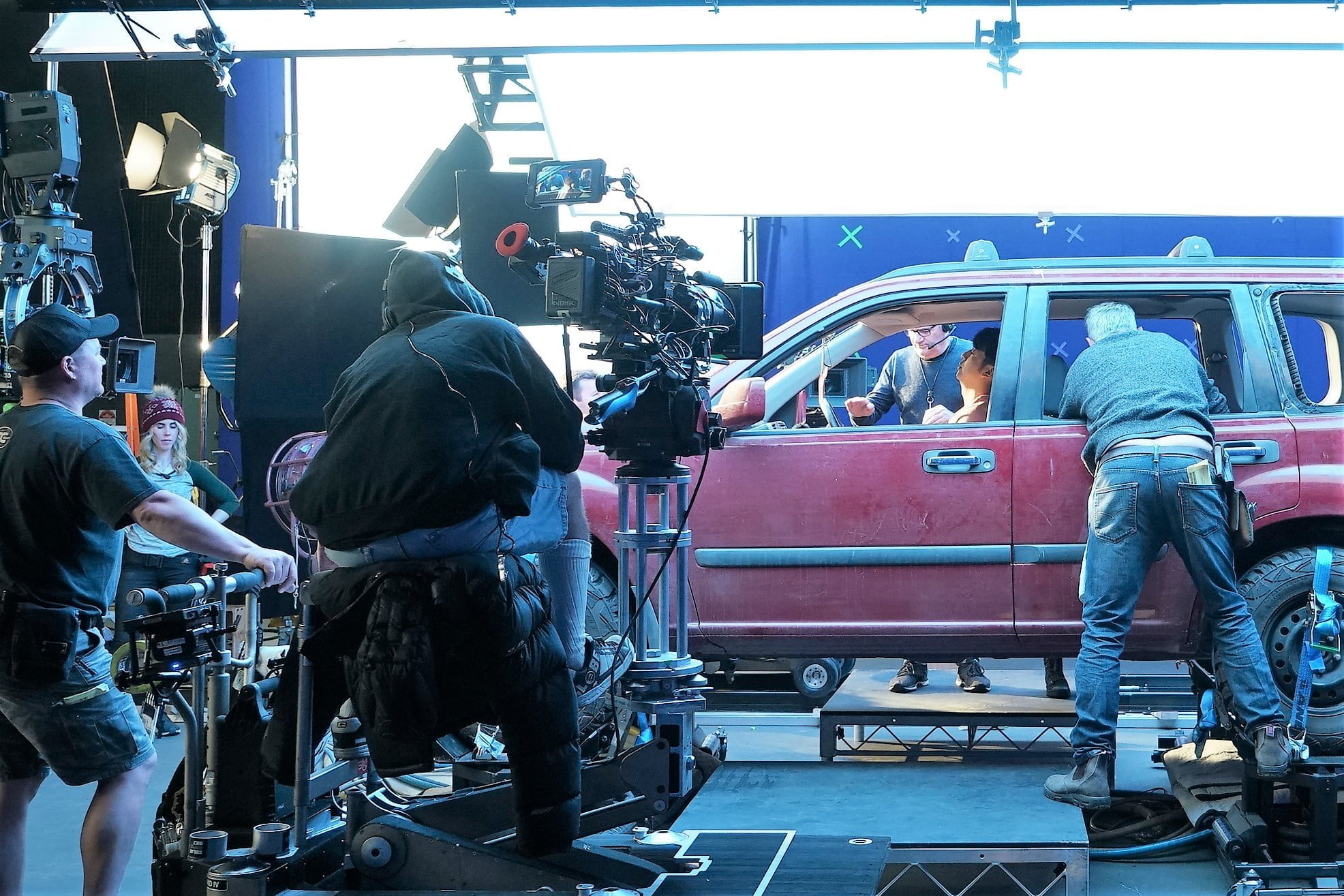 Language No Barrier For Co-pro

With more films for a Chinese audience being shot in Australia, we find out how production crew work together if they don’t speak the same language. The Whistleblower (Produced by Bill Kong and Greg Basser and directed by Xiaolu Xue) is a Chinese-Australia co-production filmed at Docklands Studios in 2018 and due for release in 2019. Two senior production crew—Set Decorator Rolland Pike and Director of Photography Marc Spicer–explain how it came together.

How would you describe The Whistleblower?

RP: An action adventure buddy flick is how I’d describe it, with thriller elements and even industrial espionage.

MS: I’ve always thought of it as like The Bourne Ultimatum but with an accidental hero. He’s a middle level executive who, through a past relationship, stumbles upon corruption at a huge scale and tries to do the right thing.

Before The Whistleblower, did you have experience working with a Chinese crew?

RP: I had worked on an American production which partly shot in Shanghai—a film called The Great Raid (2005). Then I did a little bit on a film called The Painted Veil (2006) which was an Australian-Chinese co-production. The Whistleblower was the first time I’d worked closely on a production from China in Australia.

MS: I shot second unit on Crouching Tiger Hidden Dragon (2000) and Bill Kong produced that and I guess he gave me the thumbs up to be interviewed and then I met Xiaolu. I think what appealed to them is I shot first unit on Fast and Furious 7 (2015) and I shot the action unit on Fast and Furious 8 (2017) on top of having made documentaries in China. I’ve spent months in Shanghai and Beijing and travelling around and I have a love of Chinese culture.

On a large project like this, set in three different countries, what are some of the challenges?

RP: It is set in Australia but also in Malawi in Africa, and there were also short sequences shot in China over about ten days. So we had to make sure the audience always knew what place they were in. Jeff Thorpe, the production designer, and I worked out colour themes for the three different countries—Australia, Malawi and China—so we had a quick visual reference on where we were all the time. With Malawi, we did lots of research and even got real fabrics and furniture from Malawi. Jeff designed a lot of facades that we could place over existing buildings to feel like Malawi. We created downtown Malawi in the Melbourne suburbs of Footscray and Dandenong with truckloads of red sand on the street. Our African extras said “it feels just like home”.  We shot Melbourne for Melbourne, such as a hyper-real red light district in city laneways. And we used the old Hazelwood power station for a chase sequence which cut to our studio set which had a massive long tunnel.

MS: I suppose I was brought in to give it a big Hollywood look. In pre-production Xiaolu gave me six or seven still photographs and frames out of movies, to show what she wanted it to look like, and she leant on me to help choreograph, speed up the visuals, manage the transition from drama to action and from action to drama. Each afternoon we would review the footage from the day before and cover a whole wall with scenes. This is how we agreed on how to get out of one scene and into another. There was a constant refinement visually of where we were going to take the movie and I worked closely with Rolland and Jeff the production designer.

There was a large number of Chinese-speaking crew. How did you deal with the language barrier?

RP: The crew was a mix of mainland China and Hong Kong crew. The producers spoke English, but the director Xiaolu didn’t, however she had an amazing assistant Grace Gao who acted as translator. Although I couldn’t speak to the director in English, I felt like I had a really good relationship with her because of this fantastic assistant that she had. I would speak with Xiaolu nearly every day and the information flow was really good.

MS: Grace Gao was our go-between and she was a very good translator. I’m used to talking in ten second to twelve second bites so something can be quickly translated. And it’s very much a visual medium, so I would carry my digital Sony camera on location and I’d storyboard with it. I brought the storyboard artist into my office every afternoon to go through what we shot the day before, and then Xiaolu and Grace would come in and we’d talk them through it.

How do you find working at Docklands Studios?

RP: The great thing about Docklands Studios is it’s right in the middle of the city. It’s easy to get to freeways and stuff and there’s room to store props. We had a massive vehicles department on this project, and they took over the whole back area—30 or 40 vehicles all under cover.

MS:  We had a lot going on in there—we had sets that were tunnels and shafts and underground lifts, and skywalks that went into blue screen. There was nothing that we couldn’t do at Docklands. It’s world class in that respect. The infrastructure’s there, there’s the height, there’s the good service, it’s air conditioned so you can fill with smoke quickly, and you can extract it quickly so they’re great stages.

What’s next for you?

RP: We’ll just have to see what the wind blows in! But part of the fun and fear in this business is you never know what’s going to happen. Once I had a phone call on a Thursday night when I was in Melbourne and I was in Shanghai by Monday morning, so things can happen very quickly.

MS: I’m off to do Escape Room 2, which is great for a DP because it’s all interior and working closely with the production designer. It’s all about lighting, and there’s suspense and action and thriller and performance at a very heightened level. I love it!

Plot summary: Mark Ma is a Chinese expat working in Australia for a local company.  A fatal accident leads Mark to discover that the new technology developed by the company he works for may have major safety issues. In search of the truth, Mark investigates the company’s conspiracies behind closed doors.

Background: The project has received financing through Perfect Village, Edko Films and Beijing Carving Films, with government support through Creative Victoria and Film Victoria. As an official co-production The Whistleblower is also receiving assistance from the Federal Government through Screen Australia.

Ausfilm, in partnership with the Australian Embassy in Beijing assisted in attracting the production to Australia through a filmmaker familiarisation tour with location scouting, and introductions to leading screen businesses.

The Whistleblower occupied sound stages, production offices and workshops at Docklands Studios during 2018.

It’s a Wrap For US TV Series