You never know where a chance encounter will lead you in life – just ask Ross Murdoch.  Back in 2000 he was a house carpenter having a quiet drink in a pub when he struck up a conversation with a stranger, who happened to be a set painter on a popular kids’ TV series, Saddle Club. Murdoch went away with the phone number of the series’ art director and within days found himself on set building horse stables. 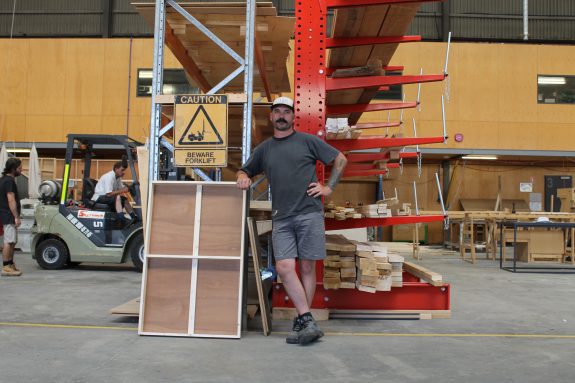 Ross Murdoch in the workshop at Docklands Studios Melbourne

Fast forward to 2017 and Murdoch is one of the busiest construction managers in Victoria’s film industry. He’s in charge of sets for the new sci-fi thriller Stem, by writer-director Leigh Whannell, who’s back home in Melbourne after a big splash in Hollywood with Insidious and Saw.

In the cavernous workshop at Docklands Studios – a former maintenance depot for the Port of Melbourne – Murdoch leads a 25-strong crew creating a world in the near future where technology controls almost everything. Stem is the story of a paralyzed technophobe using an experimental computer chip to avenge his wife’s murder. 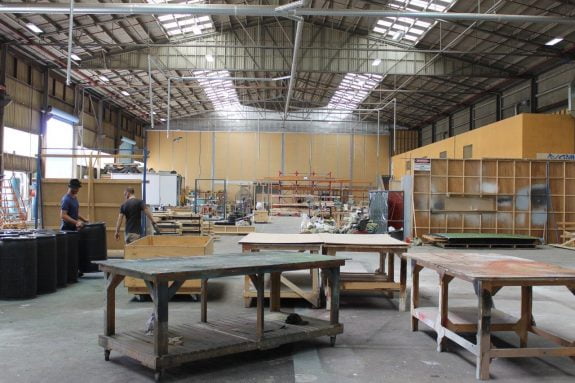 As trucks rumble in with building materials and machinery, Murdoch pauses to reflect on a career spanning two dozen film and TV productions, building sets or heading construction. Highlights include an elaborate old London street scene for the Gold Coast shoot of Peter Pan (2003) and a dilapidated Mexican church for the Docklands shoot of Ghost Rider (2007). For the West Australian shoot of Red Dog: True Blue (2016), Murdoch created an underground cave filled with water. On a tight budget and a fast turnaround his team sculpted the cave from concrete in Perth and trucked it in sections to the filming location where it was sealed and filled with water.

Murdoch’s longest project was the $200 million blockbuster The Pacific (2007-08), at the time the most expensive mini-series ever made.  As second in charge of construction, Murdoch spent six months in tropical far north Queensland crafting bloody battle scenes from World War Two. Then came five months based at Docklands Studios, including the re-creation of 1940’s Melbourne in the city’s CBD for the dramatic re-enactment of US troops arriving in town.

Along the way, he had a stint on the tiny Mediterranean island of Malta, running a fleet of 80 trucks transporting crew and equipment for the ambitious World War Z (2013) – a job he rates as his most stressful to date.

“Murdoch seems to thrive on tight timelines and budgets, along with the pattern of working feverishly for weeks on end.”

Over the years, Murdoch’s steady-as-a-rock persona has served him well in the high-pressure world of film – 12 to 13 hour days crafting sets, adding finishing touches as the cast and crew move in, while making every dollar count. “When we start a shoot, I’ll discuss ideas with the art department and they’ll get their people to start drawing things up. That’s when I start costing things, trying to justify each expense to the art director.”

These days Murdoch spends most of his time in his hometown Melbourne, and has been a familiar face at Docklands since it opened in 2004, on productions such as Where The Wild Things Are (2009), Predestination (2014) and Childhood’s End (2015). As sets take shape in the workshop, Murdoch has created a family atmosphere among the tight knit crew. His wife, Jess Rogers, coordinates travel and transport while their Blue Heeler, Zissou, greets visitors with a friendly lick.

Murdoch seems to thrive on tight timelines and budgets, along with the pattern of working feverishly for weeks on end interspersed with down time. With the Stem shoot close to wrapping up, he and Jess are looking to grab a quick break before the next project comes along.  In April, he’ll be keeping an eye on the small screen for the launch of Season 3 of The Leftovers. Murdoch was construction manager on the acclaimed mini-series, shot at Docklands Studios and around Melbourne during 2016.

Bringing filmmakers’ visions to life is an unexpected career path for a bloke who used to knock together house frames. So, what about the guy he met in the pub all those years ago? Well, fate has brought them back together, making sets for Stem. “If it wasn’t for him, I’d probably still be building kitchens,” Murdoch laughs.

Docklands Helps Bring Hollywood Down Under

Helen Mirren is in the building!