Making movies on a budget at Docklands Studios

As the new bushranger epic, The Legend of Ben Hall continues its tour of Australia, the movie’s producer explains how he stayed on top of a tight schedule and budget.

From the first production meetings for The Legend of Ben Hall producer Russell Cunningham knew one thing for sure: “We needed a sound stage to save time and money.”

While director Matthew Holmes had had little experience with sound stages, Cunningham saw the advantages. “I wanted a roof over our heads so we weren’t bound to the weather and didn’t have to hire expensive facilities like toilets, electricity or water. I couldn’t bear not knowing if it was going to rain or not, or worrying about getting sets from one place to another on the back of a truck”, Cunningham says.

With this in mind he knocked on the door of Docklands CEO, Rod Allan who, according to Cunningham, was “flexible, accommodating and keen to support Holmes as an emerging director”.

What Holmes managed to do in just two weeks at Docklands was to capture almost all the indoor scenes for the movie. One key scene was set was in the tiny town of Binda in the New South Wales Southern Highlands. It was here on December 26th, 1864 that Hall and his gang held the entire township captive at the Boxing Day ball in the local hotel. 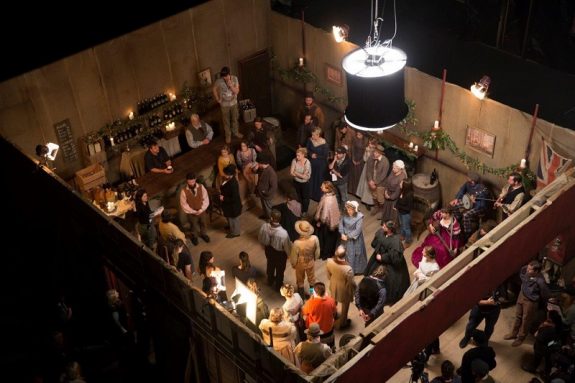 The sprawling set of the Binda Ball was a hive of activity over two and a half days of shooting. Extras rehearsed colonial style dances while teams of wardrobe, hair and makeup staff worked their magic. The set itself was constructed at Docklands to recreate the feel of an 1860s hotel, complete with wooden dance floor.

To get through the Binda Ball scene quickly and efficiently, Holmes decided not to shoot the sequence shot by shot. Instead, he had two cameras covering every scene at all times, with the sizeable cast performing in long takes of up to two or three minutes.  The resulting sequence came together smoothly in the edit suite and is one of the movie’s most dramatic. 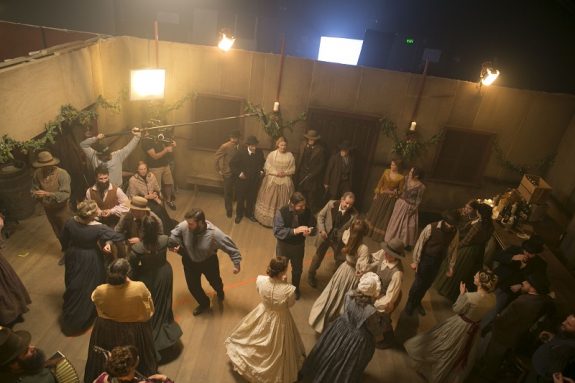 Another way the Ben Hall crew made the most of every dollar was designing sets that could be reconfigured to create different interiors. One particular hut was redressed by the Art Department in seven ways. 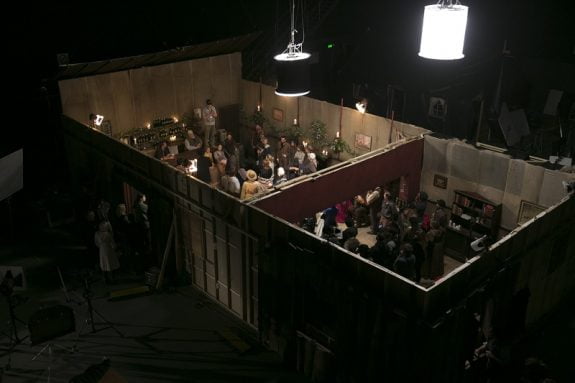 The two room set of the Binda Ball was later used for Morriss’ General Store and the Breadalbane Inn.

The Docklands Studios sound stage was used for two of the eleven weeks of shooting, a decision that Cunningham says kept stress levels in check. “Having the costumes, make up, wardrobe right there, we couldn’t have done it without that. Thank God we had toilets and kitchens and so on – you don’t get that luxury on location!”

Production days at Docklands were a contrast to the shooting of outdoor scenes in rural Victoria and New South Wales, where cast and crew faced extreme weather. One outdoor scene for the Binda Ball was shot in sub-zero temperatures after midnight with actors in thin costumes for a summer evening in December.

The Legend of Ben Hall is the story of the last months of Hall’s lengthy criminal career. His life has been unravelling since his wife Biddy ran off with his friend Jim Taylor, taking Hall’s 3-year-old son, Henry. Ben Hall is played by Sydney actor Jack Martin who appears to bears a strong resemblance to the bushranger.

American-born Cunningham – a long-time fan of Westerns – is confident The Legend of Ben Hall will have broad appeal. “Australia is a tough market, you can’t just focus on the domestic audience. You need international appeal and this movie has that already.”

On the prospect of bringing future projects to Docklands Studios, Cunningham is unequivocal. “One thousand per cent we’d love to come back to Docklands. No, make that two thousand percent, or three thousand!” 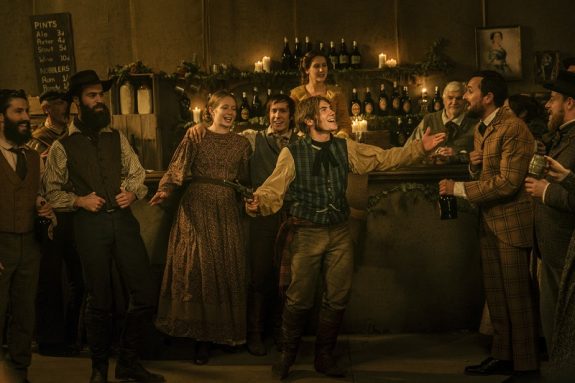 Jamie Coffa (as Ben Hall’s partner-in-crime, John Gilbert) as he appears on screen at the Binda Ball