The producers of HBO’s critically acclaimed The Leftovers did not have far to look for a leading art director when they shifted production of the series to Melbourne’s Docklands Studios this year.

With an impressive list of film and TV credits including The Railway Man, Lion, Tracks, The Sapphires and The Slap, Melbourne’s Janie Parker was an obvious choice to lead an art department of around 60, with all but one drawn from the city’s large pool of creative talent.

The Leftovers tells the story of a world where two per cent of the population has inexplicably vanished, seen through the eyes of two families dealing with the aftermath. It was co-created by Damon Lindelof, Emmy winner for Lost, and Academy Award nominated writer Tom Perrotta.

While viewers have to wait until 2017 to see how this third series takes The Leftovers story from Texas to Australia, it’s already clear that Victoria’s vast landscape will be heavily showcased. 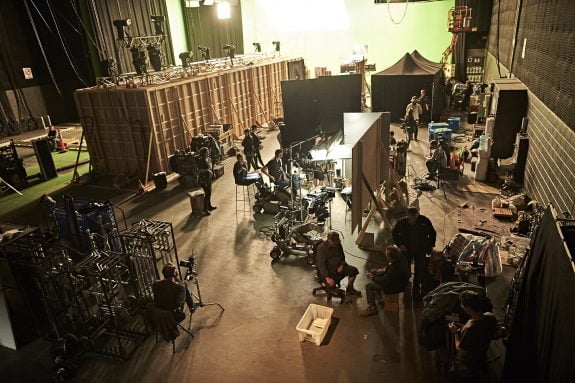 “Filming on The HBO series, The Leftovers in Stage 4” – ©Warner Bros. Entertainment Inc.

“One of the challenges with a TV series like The Leftovers was the fast turnaround of sets built both in studio and on location compared with some feature films which have longer pre-production times”, Parker says. “The layout of Docklands Studios was perfect for us. Our art department design hub was upstairs so I could run down to see progress on the sets and props, or check in with the costume department or production office also located on the lot. And the amount of parking so close to the city is a big bonus for saving time.”

Paino’s detailed mood boards were a vital reference point to introduce the style to the art team, along with gathered images from magazines, books and the internet. Even Australian landscape painters Tom Roberts and Albert Namatjira served as inspiration for the look of The Leftovers.

With the series now in post-production, Parker has handed over the design bibles to leading Melbourne VFX studio Iloura to ensure the visual effects blend seamlessly with the physical space depicted on screen.

Production took place in and around Docklands Studios Melbourne over 21 weeks from May 2016, with a cast led by Justin Theroux, Amy Brenneman and Liv Tyler.

The Leftovers series 3 is due for release in 2017.

Making movies on a budget at Docklands Studios