Science fiction, considered by some to be the “literature of ideas”, is a genre well suited to a studio environment. Studios give sci-fi creators licence to customise their worlds and build futuristic settings that are ideal for time-travel and other sci-fi themes.

This year Docklands Studios has benefited from a local sci-fi renaissance. The local production team of an innovative sci-fi project called Restoration (shot in August) appreciated the controlled environment provided by a sound stage. “We created multiple locations in a single sound stage and were able to do a ‘Hollywood wrap’ at the end of each day’s shooting, thereby avoiding a daily pack-down and lost time,” said Toby Gibson, Restoration’s producer.

A month later, NBCUniversal’s Childhood’s End, an epic six hour sci-fi miniseries, began thirteen weeks of pre-production prior to its scheduled shoot in December. According to the State Government of Victoria, “Around 380 talented local practitioners, including up to fifteen heads of department, will work on Childhood’s End, generating an estimated $20 million in production expenditure in Victoria.”

“Sci-fi is high-concept and requires set design and a level of control that cannot be achieved on location. These projects give art and costume departments the opportunity to work at elevated levels that don’t come with contemporary drama. We’re very pleased to have a project like Childhood’s End onboard,” said Rod Allan, CEO Docklands Studios.

Australian sci-fi thriller, Predestination (which also filmed at Docklands Studios and around Melbourne) premiered at the Melbourne International Film Festival in July this year. 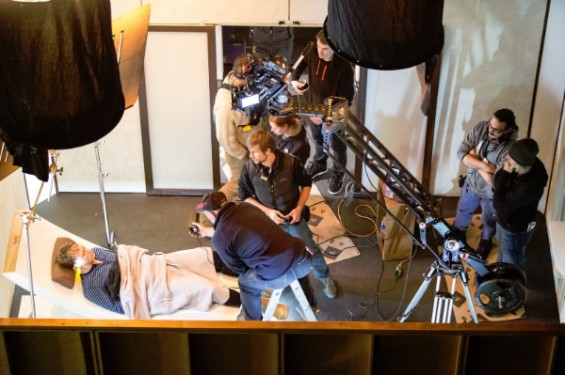